View our collection of beautiful Buddha statues in our gallery

In Buddhism, an asura is a demigod of the Kmadhtu which is portrayed by having three heads with three faces each and either four or six arms. In fact, the general character of Buddhist asuras was derived from the wicked character of asuras of Hinduism. But Buddhist asura has acquired very distinctive myths that can be found only in Buddhist texts. In the Buddhist texts, asura is often referred to as Titan, demigod, or anti-god. 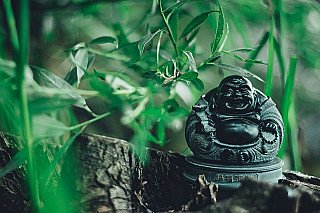 Asura lived in the Trayastrimsa world on the peak of Mt. Sumeru along with other gods. It was believed that when Sakra, became the ruler of the world, the asuras celebrated the occasions by drinking a lot of Gandapana wine. This liquor was so strong that Sakra forbade the other gods to drink it. But when asura drank the liquor, they were weakened and couldn't hold themselves. Therefore, Sakra throws them over the edge of Trayastrimsa into the base of the Mount Sumeru. The asuras after awake didn't know where they were so they settled there. The trees which are known as Cittapatali grew there. Asura found that these trees were completely different from the tree, Paricchattaka, at the peak of the Mount Sumeru. They finally knew that they were dispossessed. The place where asura settled down was known as asura world.

Knowing they were thrown from the peak of Mt. Sumeru, they later climbed up the steep slopes of Sumeru with the feeling of revenge. Sakra also set out but knowing the numbers of the asura, he was forced to retreat. As he was flying he saw that his chariot was destroying the nests of the garudas. He then ordered to turn back. Asura saw that Sakra was pursuing them. They thought that Sakra came back with a large army. Therefore, they fled the scene.

The war between the gods and asuras continued for many years. However, there was a partial concord between them. Sakra when saw Suja, daughter of the Asura chief Vemacitrin, he fell in love with her. As a father, Vemacitrin was very liberal. He gave freedom to his daughter to choose her life partner. When there was an assembly of the asuras to choose the husband. She chose Sakra who attended as a disguised as an aged Asura. Thus Vemacitrin became Sakra's father-in-law.

The character of the Asuras 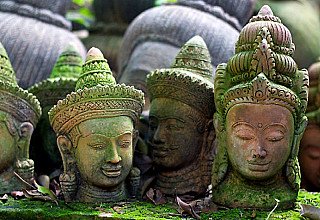 It is recorded that the asuras are more inclined to negative emotions especially wrath, pride, envy, insincerity, falseness, boasting, and bellicosity. Due to this inclination, it is considered that rebirth as an asura is one of the four unhappy births. The other unhappy births are as an animal, a preta, or a being in Naraka.

There is a general belief that in human form, if the human had good intentions, but committed bad actions then that being may go to asura realm. The Buddhist monk Zhiyi shares his points regarding the asuras. He says that when the humans always desire to be superior and have no patience for inferiors, these kinds of behavior opens up the door of lowest order towards the asura realm for that humans.

It is also believed that the life in the asura world is quite pleasurable that humans. But they envy the devas for the pleasurable lifestyle. Which portrays that even though they have pleasurable life, they face more problems due to the jealousy and envy. It can be stated that the state of asura is quite similar to the humans obsessed with ego, jealousy, and violence who are unable to maintain the calmness within them. But in terms of power, asuras rank above human but below other deities.

View our collection of temples / shrines in our gallery