Collection of Buddha statues from monasteries and temples

The Foguang Temple is a Buddhist temple which was established in the 5th century during the Northern Wei dynasty. The temple is situated in Wutai County, Shanxi Province of China. The temple premises also include two major Halls- Great East Hall and Hall of Manjushri, and Zushi Pagoda along with Funerary pillars. The Great East Hall was built in 857 AD during the Tang Dynasty while Manjushri Hall was built in 1137. The Zushi Pagoda is the second oldest existing pagoda in China which was believed to be built in the 6th century.

Historical accounts of the Foguang Temple 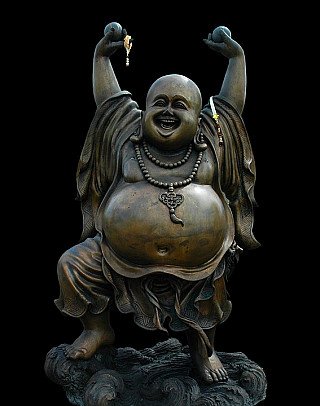 It is recorded that Emperor Wuzong banned Buddhism in China in 845 CE. The temple also got affected due to this decision and hence, the temple was burned to the ground. The only remaining structure was Zushi Pagoda from the temple's early history. But after 12 years later, the temple was again rebuilt in 857 CE. The funds for the construction was provided by the Ning Gongyu and the construction work was led by the monk named Yuancheng. The temple was used to be an important stop for Buddhist pilgrims. It is because the Great East Hall was painted in cave 61 of the Mogao Grottoes with separate designs than that of the original Hall. With which we can assume that the painter had not seen the temple before the painting. This can measure the popularity of the Foguang Temple in that period.

Likewise, in 1137 during the Jin dynasty, the Manjushri Hall was constructed on the temple's north side. In that period it is recorded that another hall which was dedicated to Samantabhadra was also constructed. But this hall was burnt down in the Qing's Dynasty.

Features of the Foguang Temple

The Foguang temple is oriented in an east-west position, unlike other Chinese temples. The cause of this position is due to the mountains located on the east, north, and south directions. As according to Feng Shui, it is believed that if the buildings have mountains behind the building it is considered to improve in future.

As it has already mentioned, the temple consists of two main halls and a pagoda- the Great East Hall, the Manjushri Hall and Zushi Pagoda along with Funerary pillars.

The Great East Hall is the largest hall in the Fuguang Temple which was constructed in 857 during the Tang dynasty. This hall is the third oldest wooden building in China. The hall is located on the far east side of the temple and is a single storey structure and has an area of 34*17.7 metres. The hall is supported by inner and outer wooden columns. The hall houses thirty-six statues along with murals that date from the Tang Dynasty and later periods. The centre of the hall has a platform which supports three large statues of Sakyamuni Buddha, Amitabha Buddha and Maitreya Buddha. These Buddha statues are depicted as sitting on lotus shaped seats and is flanked by four assistants on the side and two bodhisattvas in front. Next, to the platform, there are statues of Bodhisattva Manjushri and Samantabhadra who are riding lion and elephant respectively. Two heavenly kings stand on either side of the dais. The statue of the Ning Gongwu and the monk are also erected in the back of the hall. The hall also consists of the large mural depicting Buddha images and his past life according to the Jakarta while other smaller murals show Manjushri and Samantabhadra gathering the donors to support the upkeep of the temple.

The Manjushri Hall is also called as the northern hall which has roughly same size as that of Great East Hall. The Manjushri Hall has three front doors and one central back door and features a single eave hip gable roof. The hall has only four support pillars while diagonal beams are used to support the large roof. These support pillars are painted with the pictures of arhats during the Ming dynasty in 1429.

The Zushi Pagoda is a small funerary pagoda located to the south of the Great East Hall. The pagoda is a white hexagonal shaped 6 m tall. The first storey has a hexagonal chamber while the second storey is purely decorative. The pagoda is decorated with lotus petals and the steeple supports a precious bottle in the shape of a flower.

The temple compound also consists of two Tang Dynasty funerary pillars. The oldest one which was built in 857, measures 3.24 m tall. This pillar is hexagonal in shape.

Conservation of the Foguang Temple

Global Heritage Fund in partnership with Tsinghua University has been actively working to conserve this temple from the beginning of 2005 AD. Even though the temple has been undergoing restoration, it is still open to the public. The temple was inscribed as a part of the Mount Wutai UNESCO World Heritage Site.

View our collection of Temples / Shrines from monasteries