Looking for Buddha statues for praying?

Kek Lok Si Temple is a Buddhist temple situated in Air Itam in Penang, Malaysia. The literal meaning of Kek Lok Si Temple is Heavenly Temple, Pure Land Temple, Temple of Supreme Bliss, and Temple of Paradise. It is said to be the largest Buddhist temple in Malaysia and is important pilgrimage center for Buddhists from Hong Kong, Philippines, Singapore and other countries in Southeast Asia. The temple complex was built over a period from 1890 to 1930. The main attraction of the temple complex is the striking seven-storey Pagoda of Rama VI with 10,000 alabaster; bronze Buddha statue and the bronze statue of Kuan Yin.

The architecture of this temple is based on the Mahayana Buddhism, Theravada Buddhism, and traditional Chinese Buddhism. This mixture is not only seen in the architectural structures but in the daily activities of the worshippers as well.

Historical accounts and features of the temple 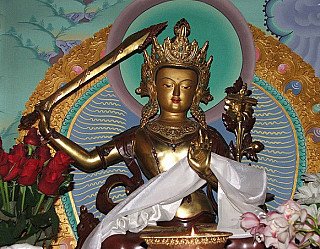 The idea to construct the temple was inspired by Beow Lean, the chief monk of the Goddess of Mercy Temple. The buildings of the temple complex were sponsored by five leading Chinese businessman. They were Cheong Fatt Tze, his cousin Chang Yu Nan, Chea Choon Seng, Tye Kee Yoon, and Chung Keng Kooi. They were also knowns as Hakka Tycoons. Alternatively, the funds were also collected through dedicating the structures and artifacts in the name of the temple's benefactors.

Among the structures in the temple complex, the main hall was completed first which housed a shrine to Guanyin. The people over there compare the shrine to that of Amitabha Buddha's Western Paradise. The main hall, which was completed first, housed a shrine to Guanyin. There are many other shrine chambers in the temple complex that houses statues of Buddhas, Bodhisattvas, saintly Lohans, guardian spirits, and Heavenly Kings of Pure Land Buddhism.

In 1930, the seven-storey main pagoda of the temple was completed. This pagoda was also called pagoda of Ban Po Thar or Pagoda of ten thousand Buddhas which was about a 30 meters high.

In 2002, a bronze statue of Guanyin, the Goddess of Mercy was completed. This statue was 30.2 meter in height and was opened to the public. It replaced the previous white plaster Kuan Yin statue. This statue was damaged due to a fire. The statue was located on the hillside above of the pagoda which is complemented with a 60.9 meters three-tiered roof pavilion. This pavilion was completed in 2009. Another peculiar attraction of this image is there are one hundred statues of the goddess Kuan Yin which are 2 meters in height and are set around the main statue. The statue also accompanies other 10,000 Buddha images, and the statue of 12 Zodiac Animal Signs of the Chinese Calendar.

The temple complex also has the bell, operated hydraulically. There are also cushion, impressive scrolls, and candles set in front of each deity. The wooden and stone carvings are highly seen in the temple complex.

The long marches undertaken by hundreds of monks from Thailand to the temple is also another festival that is been celebrated once or twice a year.

Worship at the temple complex

The devotees worship the deities in a diverse way. These worship could be in the form of counting prayer beads or simply burning the incense. The devotees also offer a cash or bowing and clapping as a form of worship. But the highly learned people offer prayers at the tower of Sacred Books in the upper part of the temple.

View our collection of temples and shrines in our gallery