View our collection of Buddha statues

Mahinda, son of the Mauryan emperor Ashoka and Devi, was a Buddhist monk widely known for his contribution in Buddhism. He was the man who spread Buddhism to Sri Lanka. It was recorded that Ashoka named him Mahinda which means conqueror of the world but Mahinda was more influenced by his mother and thus became a Buddhist monk. 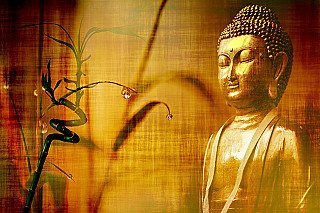 The accounts of Mahinda traveling to Sri Lanka and converting King Devanampiyatissa are documented in the two great religious chronicles of Sri Lanka- Dipavamsa and Mahavamsa. These also documents the accounts of life and deeds of Mahinda. There are also other references- inscriptions and literary that confirms the Buddhism was prevalent in Sri Lanka around the 3rd century BCE when the Mahinda lived.

Even though these events are documented, some of these are still questionable and debated because there aren't any sculptures or frescoes of them in the earliest period of Singhalese art. Even the ancient stupas don't contain any information about these.

Mahinda became the monk at the age of 20 with Monggaliputta-Tissa, his father's spiritual teacher. He guides Mahinda and was well-versed with the Tripitaka. Later after successful completion of Third Buddhist Council, under the recommendation of Moggaliputta-Tissa, Mahinda along with other fellow monks was sent to Sri Lanka with the objective to spread Buddhism.

The emperor Ashoka wished Mahinda to succeed him and made several attempts but the attempts were in vain. It was mainly due to the orthodox Hindu community's refusal to accept a Buddhist Crown Prince and as well as Mahinda's own lack of enthusiasm to take over an empire.

As documented in Mahavamsa and DIpvamsa, King Devanampiyatissa, at the time of full moon of Jettha, a national festival, King Devanampiyatissa set off for the hunting expedition in the Mihintale hills. During the expedition, they stumble upon the group of monks. These monks were sent to Sri Lanka under the recommendation of Moggaliputta-Tissa to spread Buddhism. The leading monk was Mahinda and they were invited to their base and then inquired about them. After exchanging the greetings, Mahinda preached Chulahatthipadopama Sutra. It was learned that Emperor Ashoka and Devanampiyatissa were acquainted and had good terms. There were also cases of exchanging royal gifts. Therefore the relations with Emperor Ashoka was very helpful for Mahinda to be comfortable with Devanampiyatissa.

As Mahinda preached Chulahatthipadopama Sutra, the hunting party were very much impressed and realized the contents and the teachings. Hence they converted into Buddhism. The monks were then invited to Anuradhapura for the purpose to give further dharma talks. After they reached Anuradhapura, Mahinda preached public talks in the Royal Hall, and in the Nandana garden in the Royal Park, Mahamegha. This event helped to introduced Buddhism to lay people in Sri Lanka.

Later, the royal park Mahamegha was used as the residence for all the monks visited Sri Lanka. It was then converted into Mahavihara which is the earliest center of Buddhist culture and scholarship in Sri Lanka. After delivering discourses on the different teaching of Buddha to Sri Lankans, Mahinda retreated to Mihintale to spend the vassa during the monsoon season. It was recorded that the royal family also funded to established a second monastery and then later the stupa was constructed which housed bodily relics of Gautama Buddha gifted by Maurya Empire. Then Mahinda welcomed Bhikkhu Arittha, king Devanampiyatissa's nephew, to expound the Vinaya monastic code of discipline to further Buddhism in Sri Lanka.

Mahinda died at the age of 80 in Sri Lanka. King Uttiya organized a state funeral for Mahinda and also constructed a stupa to house his relics at Minintale hills.

View our Temples / Shrines collected from different monasteries in our gallery