View our Buddha statues in our gallery

Mingun Sayadaw's formal name is Mingun Sayadaw U Vicittasarabivamsa. His childhood name was Maung Khin and as he studied under U. Sobita at the age of 10, he got his first Buddhist name, Shin Vicittasara. He was a Burmese Theravada Buddhist monk who is best known for his memory skills and his role in the Sixth Buddhist Council. 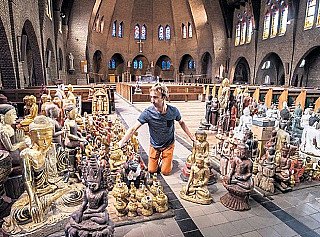 Mingun Sayadaw's childhood name was Maung Khin and his parents were U Sone and Daw Sin in 1911 CE. in Kyipin Village in Myingyan Township, Mandalay Province, British Burma. It was recorded that when Maung Khin was only 4 years old, his father died. At the age of 5, he was sent to the village monastery to get the basic monastic education. His teacher was U Sasana who was trained at the Nan Oo Monastery which was prominent in the Mandalay. Apart from the formal education through Burmese Buddhist tradition, he was trained by his grandfather, U Chai. He taught Maung Khin Buddhist prayers and recitations. At the age of 7, as per Theravada tradition, he was temporarily novicated at the Min Kyaung Talk in Myingyan with U Sobhita as a preceptor. It is recorded that from this period Maung Khin displayed great memorizing ability.

Learning about Maung Khin's progress, his mother sponsored his initiation into the Sangha under U. Sobita at the age of 10. During his stay and tutorship under U. Sobhita, he acquired the monastic name Shin Vicittasara and the meaning of this word in Pali is Outstanding.

It has been recorded that the performance of Shin Vicittasara was outstanding from the early period of education. At the age of 13, he gained prominence in Myingyan religious circle when he sat for the Vinaya Examination held by the Sanghasamaggi Association in Myingyan. In his another examination, Pariyatti Examination, the invigilating senior monks were amazed from Shin Vicittasara when he successfully recited the Abhidhamma from the memory. After that, he sat for various grading religious examinations where he showed his competences.

Later in 1930, Shin Vicittasara moved to Mingun in Sagaing Division for further studies at the Dhammananda Monastery. He settled in this monastery till his death in 1993. Since he stayed in Mingun for a longer period of time, he became to know as the Mingun Sayadaw. In the year 1933, he got the rare title of Pahtamakyaw since he passed the Highest level religious Examination at the top of his cohort. In 1934, he was entitled to the Abhivamsa by the Maha Sanghasamaggi Association, which conducted the religious exams.

He then sat for the state conducted Tipitakadhara Selection Examination. He was passed in this examination and became the first monk ever to be awarded the title of Tipitakadhara which means, keeper and guardian of the Tipitaka. He also got the title of Agga Maha Pandita by the Burmese government (during the rule of General Ne Win) and Burma Socialist Program Party.

Mingun Sayadaw died due to complications from an infection in 1992. He was given a de facto state funeral and was accompanied by large numbers of fellow monks, government officials, and devotees. His ashes were scattered over various places across the country.

There are different works that Mingun Sayadaw had accomplished. It is recorded that he played a key role in Sangha Executive Committee. As the Chief Respondent, he participated in answering all the questions that were aroused. He also played an important role in the Sixth Buddhist Council.

Upon request of Prime Minister, U Nu and Buddha Sasana Council, he works on a treatise on the Life Story of the Buddha and titled his work as Maha Buddhavamsa. This was one of the achievements of his literary work.

One of the greatest achievement of Mingun Sayadaw is to set a record in the Human memory category in Guinness world record.

View our collection of Temples / Shrines in our gallery