Looking for a beautiful Buddha statue?

Nalanda Mahavihara was a large Buddhist monastery in the ancient kingdom of Magadha in India. The mahavihara is located about 95 kilometers southeast of Patna and is near the town of Bihar Sharif. Earlier in the history, the Mahavihara was a center of learning. It was active up till early 13th century. 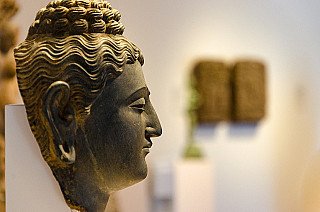 There are a number of theories regarding the etymology of the name, Nalanda. As described by the Chinese pilgrim, Xuanzang, the word Nalanda came from Na al, lllam da which means no end in gifts or charity without intermission. However, another Chinese traveler explains that Naga nanda refers to the name of the snake in the local tank. An archaeologist attributes the name, Nalanda, to the abundance of Nalas or lotus-stalks in the area and believes that Nalanda would then represent the giver of lotus-stalks.

Rise and decline of the Nalanda Mahavihara 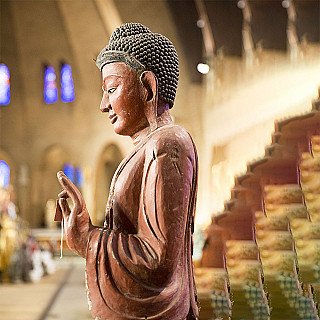 Before construction of Nalanda Mahavihar, the place was a prosperous village. It was popular place since it was accompanied by a major trade route which connects the nearby city of Rajagriha, capital of Magadha. It is mentioned that Gautama Buddha's chief disciple, Shariputra was born in this area. He later attained nirvana in the same place. To remark his success, a chaitya was built dedicating him. The events like- delivering lectures in a mango grove, and others, in this place, are associated with Gautama Buddha and Buddhism. Therefore, this place has high value for the Buddhist.

Later as mentioned by the 17th century Tibetan Lama, Taranatha that Ashoka the Great built a great temple at Nalanda at the site of Shariputra's chaitya. He placed Mahayana Philosopher, Nagarjuna, and his disciple, Aryadeva at Nalanda with the purpose to head the institution. Taranatha also stressed that around 108 temples housing Buddha statues were also constructed at the location. These sources point out that the Buddhism was flourished before the 3rd century. But as per the archaeological point of view, there was no evidence that has been unearthed to support the assertion.

Even though there has been a discussion, the Nalanda Mahavihara was constructed before, its history has been recorded through Gupta Empire. As asserted by Xuanzang and Korean pilgrim, Prajnyavarman, the Sangharama monastery was constructed during the period of Sakraditya. Later his successors extended and expanded the institution by building additional monasteries and temples. It is recorded that around 300 ft high vihara was built housing Buddha statue. This vihara as Xuanzang explains resembles the great vihara under the Bodhi tree.

It is also seen that the Gupta Kings continued to build the building at Nalanda and expanded the area. There has also been recorded that not only Gupta Kings, other dynasties were also interested in the Nalanda. Purnavarman, Maukhari dynasty erected an 80 ft high copper Buddha image and also constructed a pavilion of six stages. King from central India built the gate in the Nalanda Mahavihara.

After the Gupta, Pala dynasty established themselves in North-eastern India from 8th century till 12th century. By religion, Palas were Buddhists but Buddhism in their time was a mixture of Mahayana and Vajrayana. It is recorded that in the period of Pala dynasty, four other mahaviharas were also built. With the establishment of five centers for Buddhist learning in eastern India, these centers formed a state-supervised network. It also helped for the great scholars to transfer easily from one center to another.

During the Pala dynasty, the Vajrayana influence was strongly spread over the areas which also influence the Nalanda mahavihara. Therefore, Nalanda which once focused on liberal scholarship with Mahayana viewpoint turn to Tantric doctrines and magic rites.

Collection of shrines and temples in our gallery